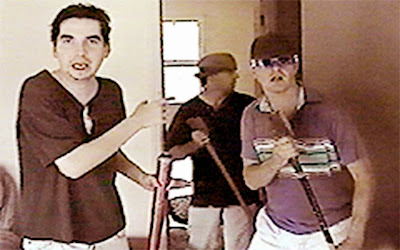 We have asked a bunch of our favorite filmmakers and others to share some of their favorite short films with us. The submissions have been really varied, but there has been nothing so far as wild and loose as this one sent to us by writer/director Todd Rohal. It’s hard to convey True Mayhem, but here it is: lightning in a Thunderbird bottle.
Todd Rohal introduces SMASHIN’ IT UP:
Skizz Cyzyk ran a film festival of oddities called MicroCineFest in Baltimore, Maryland for years and he dug up this gem of a movie from Georgia. I think the less we know about the film or the people that made it, the better. This is like the Jandek of short films. If I were to put two items in a time capsule in the hopes of shattering the brains of our future generations, it would be this film and the theme song from this film.