From Criterion: Farran Nehme on the Ultimate Newsroom Comedy 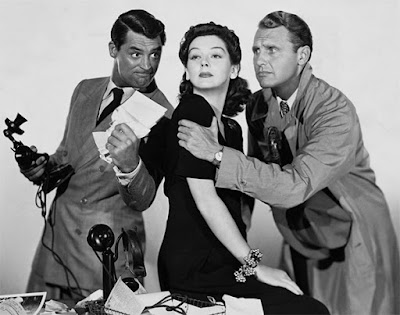 There’s a really terrific post today on Criterion’s website from Farran Smith Nehme, one of our favorite writers, about Howard Hawks’ absolutely wonderful 1940 screwball comedy HIS GIRL FRIDAY. This is some of the best stuff I have ever read about this film, a longtime favorite.
A sample:

But the most striking instance of hush amid chaos comes shortly after, when Mollie Malloy, played by Helen Mack in the only dead-straight performance in the picture, comes into the pressroom to berate the reporters. She took in Williams one night out of pity, and from this they spun a few days of leering fiction: “I never said I loved Earl and wanted to marry him on the gallows. You made that up.” Here is the underside of reporters’ callousness; their mockery isn’t funny when it’s turned on this sad woman. As Mollie approaches hysterics, Hildy gently leads her out of the room, which falls silent, in the longest, quietest shot of the picture, interrupted only by a call for Hildy, which is put on hold. Hildy returns at last, and holds a pose in the door for a moment, to get their attention. Then she says—with rue, not nastiness— “Gentlemen of the press.”

It’s one of the moments that show that Hildy’s femininity is an asset, not a liability. Tough as she is, she has an emotional intelligence that the boys in the back room lack. What’s more, they know it, and they respect her for it. The movie also slows down for a moment as they read her interview with Williams, and for their reaction: “I ask you, can that girl write an interview?”

Nehme, whose film blogging has taken a backseat somewhat to her work for other prestigious outlets, is one of the most perceptive and readable writers going today. Her site, Self-Styled Siren, is a repository of many years of excellent articles about classic Hollywood topics. Check out her work if you have any interest in the field.