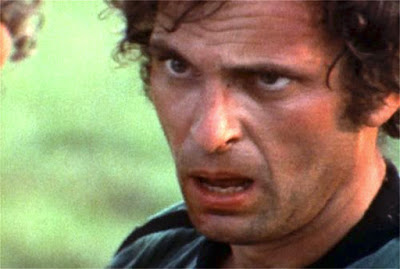 Novelist and journalist Norman Mailer was, in addition to being one of the finest writers of his era, a truly difficult man, who, among other things, exalted violence as a means of achieving existential purgation. He was a fascinating, contradictory person, writer, would-be politician, and even filmmaker.

For his third film, MAIDSTONE (1970), a loose and experimental political film, Mailer himself played a presidential candidate whose campaign is shadowed by a documentary crew. Mailer hired actor Rip Torn (born on this date in 1931 in Temple, Texas) to play his half-brother in the film. Torn, whose reputation as a fine actor is accompanied by an equally notorious reputation as a hell-raiser, did not disappoint on either count. The situation between Mailer and Torn became more and more tense as filming continued, and, on one beautiful day, as Mailer’s family cavorted in Provincetown, Torn attacked. Literally. The whole thing is captured in the final film.

As cinematographer D.A. Pennebaker films in long shot, we see Torn hit Mailer with a hammer. They wrestle and tumble to the ground as Pennebaker closes in for a tight shot. True to his documentary roots, Pennebaker does not intervene in any way. This is rough, tough stuff, as Mailer bites Torn’s ear, drawing blood and the two are locked in a death grip. Mailer’s family and friends intervene and they have a tense stand-off. Mailer tells Torn he won’t include the footage in the movie. Torn repeats, “Norman, you know this is what I had to do” several times. Then, as Mailer comforts his hysterical children, Mailer’s wife Beverly, screams and threatens Torn. It’s tense and violent stuff.

Watch the scene here. Warning, this real violence may be disturbing.

Many years later, in an interview, Mailer, who says that he and Rip Torn had made up in the years since, said of the footage:

I remember afterwards I was furious with him and I went up to him and said, “Well, would you photograph my last gasps?” He had a work ethic just as I did and we discovered that his work ethic and mine had nothing to do with one another. At that point my work ethic was, the film’s over, let’s congratulate the director. His work ethic is finding a scene so he stayed with the scene. On balance, he may have been right. I think he probably would of intervened at some point, but it would have been way down the road.

Rip Torn, a University of Texas alumnus, was inducted into the Texas Film Hall Of Fame in 2011.