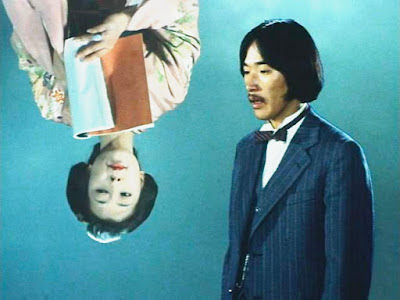 The incorrigible Japanese filmmaker Seijun Suzuki is well known for having been basically banned from making films at all after 1967’s explosion of bullets and butterflies BRANDED TO KILL. The stated reason from his bosses at Nikkatsu Studios was that his films “made no sense and no money.”

You can see the BRANDED TO KILL trailer here:

He was able to sneak back into the industry 10 years later with A TALE OF SORROW AND SADNESS, an adaptation of a popular manga about a teenage girl golfer. In Suzuki’s hands it became a violent, operatic condemnation of modern Japanese culture. This wasn’t what the producers at Shochiku Studios had in mind, and he was on the skids again.

Three years later he had hustled together some independent funding for his next project. Since he was still only 56 years old, the prudent thing for him to do was surely to prove his commercial viability as a maker of films that could recoup their investments. Right?

Care to guess what he did with the money? If you guessed, “he made an obtuse and surreal metaphysical trilogy about the nature of artistic creation, with ghost sex and phantom musical recordings” you are absolutely right.
As you might predict, the films did not make money at the box office, but they did score big with critics, and these three films are considered among his best and most important. They also tended to place his earlier work in perspective for audiences who may not have had much of a unified opinion about his works.

Now, nearly 40 years after their making, we are finally able to revisit these unusual films on the big screen in a new restoration. They will be playing over three successive Saturdays at the AFS Cinema starting with ZIGEUNERWEISEN Saturday, February 10.

The films constitute a trilogy in name and theme only so if you miss one, it won’t affect your ability to grasp subsequent titles.