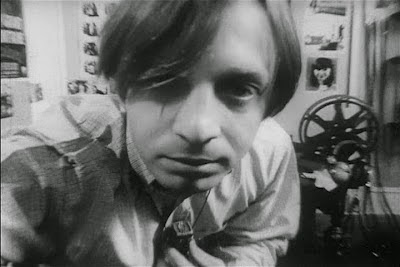 Texan filmmaker, actor and writer L.M. Kit Carson died last night at the age of 73 after a long illness.

In 1967 the Irving-based Carson and his collaborator Jim McBride made a movie that forever changed the face of film. It is called DAVID HOLZMAN’S DIARY and in the opinion of many it marks the beginning of microbudget independent film. It was widely shown on campuses and at the kind of small home-made film societies that existed at the time and, along with the documentaries that inspired this (first?) mockumentary, firmly established the light, handheld 16mm camera as the M-16 rifle of the independent cinema revolution.

Today the film, which is about a young man obsessed with what we would today call vlogging, seems shockingly prescient about our own times. If it were in color and had the low contrast, high compression look of digital video, it could be one of the many such ego exercises which appear on YouTube. Except it’s much, much funnier. DAVID HOLZMAN’S DIARY, a film made for $2500 now resides in the Library Of Congress National Film Registry.

If Carson had never done anything after DAVID HOLZMAN’S DIARY his legacy would be secure, but he was only getting started. He made one of the very best documentaries about the intersection of creativity and madness, THE AMERICAN DREAMER (1971), about Dennis Hopper’s long journey to a final cut of his (some say) disastrous film THE LAST MOVIE. It’s prime time Hopper and prime time Carson as well.

Carson and McBride reteamed in 1982 for a version of BREATHLESS (1982) which is not exactly a remake at all, but rather a really very interesting, very American update of the characters from the Godard film. It’s well worth watching. Carson’s script imagines a manic vision of American youth that was out of step with the times, but that (stop me if you’ve heard this already) gets better as it ages.

Next, Carson adapted Sam Shepard’s PARIS TEXAS (1984) for the screen. It is one of the finest films ever made. If you haven’t seen it, you should not waste any more time reading this. Just go watch it. It’s a film that made an entire new generation of filmmakers proud to be from Texas. Director Wim Wenders, who is a German,  relied upon Carson’s sense of the authentically Texan. The results speak for themselves.

Carson wrote a number of other scripts in the next few years. One that stands out for us is the extremely witty and subversive TEXAS CHAINSAW MASSACRE 2 (1986), filmed in Austin. Carson and director Tobe Hooper had a blast with this one and it stands as one of the funniest satires of the decade.

In between all of these screenwriting gigs Carson had time to produce a bunch of films, co-found a film festival, live a pretty full life, marry actress Karen Black, explore new technology, and encourage many others. Among the folks he encouraged were the Anderson brothers and Owen Wilson, whose short BOTTLE ROCKET he executive-produced. He later produced the feature version as well and has been cited many times by Wes Anderson as a formative influence.