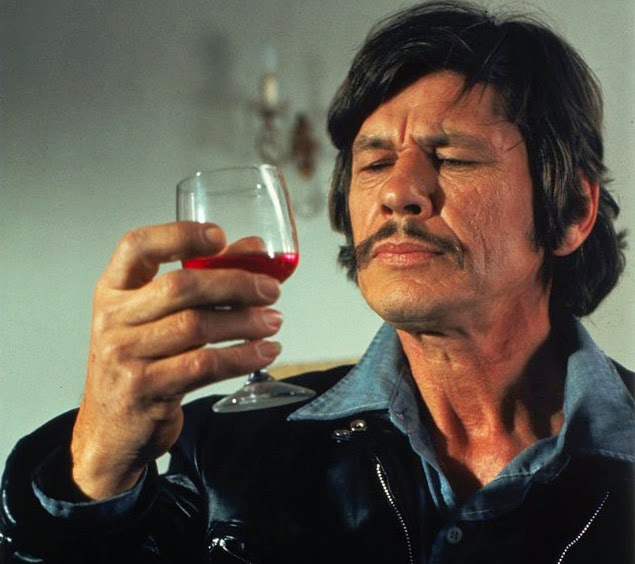 I think by now many of us have seen the legendary and amazing Charles Bronson aftershave commercials (directed by HAUSU maker Nobuhiko Obayashi). Just in case you haven’t, or are having a Low-T day. It follows:

I also think we’re pretty well aware that American (and European) stars travel to Japan all the time and make unspeakably bizarre commercials a la LOST IN TRANSLATION. As we live in an internet age now, many of those commercials have made it to us and it’s hard to imagine that any celebrities would believe the old “no one in America will ever see this” but back in the ’70s, such assurances carried weight and the following commercials were made by A-listers, B-listers and Why-are-they-on-any-listers, none of whom would have had any idea that they would follow them across the world and down through the decades.
Most are just weird. Like these instant coffee commercials with Kirk Douglas. In the first he is teamed with James Bond composer John Barry (why, why, why?) and in the second with a sedate looking John Frankenheimer. Tagline: “Good coffee. It refreshes my spirits.”
In this (perfume?) commercial, Anthony Perkins, whom we justifiably perceive a sinister figure thanks to his role in PSYCHO, does something weird, probably illegal and maybe (depending on what he wants the bird for) genuinely sick. But it’s all fun because it’s Japan. Tagline: “Kanebo: For Beautiful Human Life.”
Here are a couple featuring Sean Connery in an apparently mediterranean locale. In the first one he sweats a lot (the sweat looks fake) then he pees on a Mercedes (unless something else is happening here but that’s what it looks like). In the second one he drives his large, elegant antique car past a different large elegant antique car, driven by an old guy who looks like the doorman in the Mandom commercial. The old man has a shaggy dog who looks like he is freaking out. Much significance seems to attend this seemingly mundane transaction. Tagline: “Dynamic Elegance.”
Here, Alain Delon walks down a flight of marble steps to his car as the rain falls. Before he gets in he turns and regards a wet, miserable-looking dog for kind of a long time. Then he gets into his Mazda and drives off, leaving the dog there for some other sap. Anyone know where I can buy a Mazda at this time of day?
Now it’s Francis Ford Coppola’s turn to cradle an audiocassette like an entranced shaman trying to suck all the mojo out of a sacred figurine while Ray Charles croons “Georgia”. Coppola then states his brief theory about good sound. I’m sure Fuji sold a lot of tapes that year anyway.